Yet another balloon highline

Just recently I came back from quite a big project in Monument Valley in Utah, USA. My friends from OneInchDreams got the funding for a project to promote German American friendship in a special way. They came up with an idea for a short film, called BuildingBridges, which features a balloon highline stunt. The plan was, to shoot the movie and the stunt in a typical American landscape – the Monument Valley. Obviously I was happy to join them and I thought it shouldn’t be too hard to walk a balloon highline again, since I had done the stunt two times already (have a look at this previous post on my balloon highline experience).

This was such a complicated project to plan. So many things to take care of, ordering balloon envelopes, getting visas, permits and insurances, finding balloon pilots, organizing camera equipment and a helicopter for aerial footage, etc.. I’m glad and thankful that I wasn’t the one who had to deal with all of this. However, I could feel the pressure and the stress level rising the more we approached the end of our stay.

On the last day of our planned stay the weather finally allowed us to go into the Navajo Tribal Park to do the stunt. Everyone was ready and excited. The helicopter was in the air and some low foggy clouds between the buttes. Everything looked beautiful. There was just one problem. There was too much wind. We had to cancel the first attempt, waited a bit and tried another time to take off. But it was still too windy. After waiting for another hour or so, we realized it was not going to happen.

The day of the stunt

After rebooking four flights, we had another chance the next morning. The forecast seemed alright, but no one of us actually believed in weather forecasts anymore. It was the fifth day in a row that we got up before 5am. In the morning the winds are the calmest and the light is good for filming. This time we were ready super early and there was barely any breeze. Before sunrise we were already up in the air. But it was still too dark for me to walk the line.

Until then I was able to stay quite relaxed although I was well aware of the pressure. If I fell of the line before I was able to walk it, it might have huge implications on the outcome of the whole project. But once the helicopter was ready, the sun about to rise, I realized I have to walk that line. Suddenly the nervousness started. My legs started shaking and I didn’t really feel like going onto the slackline. But I didn’t have a choice… so after trying to relax myself by breathing slowly and shaking my limbs, I scooted out on the line and stood up for the first time.

It felt really soft and wobbly. The baskets behind and in front of me were shaking sideways. I was afraid of not being able to catch the slackline if I lost control. So I went down and held on to it.

It was super intense. I had to focus really hard on walking, on breathing and on not letting my fear control my movements. I didn’t even notice my surroundings anymore. My eyes were locked on the basket of the other balloon. Luckily on my third try, I managed to walk the whole line. It was a huge relief, not only for me, but for the whole team.

But the helicopter was still flying and I was supposed to keep on walking to get in a few more shots. Going higher with the balloons, they started turning around each other and it was really hard for me to find the right moment to stand up again. My batteries were drained from the first walk and the longer I tried the more frustrating it became. Time was ticking and when I realized I needed a break, I was told that we had to land now. So I went to the middle of the line and stood up one last time.

But before I was even standing, I fell to the back and the slackline gave me a final push to initiate a fast spin. Flipping down to earth again I was finally free. No pressure, no more cameras, just me and my parachute. I opened the parachute quite high and had a few minutes to enjoy the view above monument valley. Eventually I landed in the Valley and had some time to process what had happened in the last couple of days until my friends picked me up. 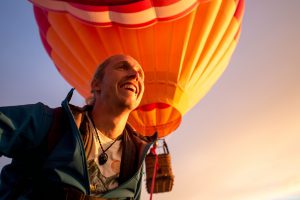 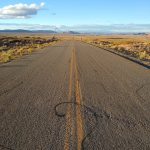 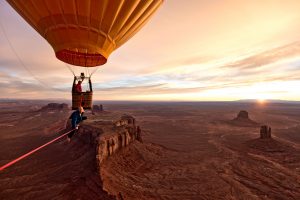 Preparing to stand up... 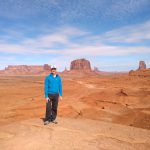 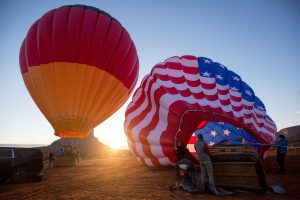 Too windy for the balloons

The balloons above Monument Valley

Copywrite for most of the pictures by OneInchDreams